A few days after the RTX 4090’s overheating issues were revealed, the investigation is progressing. It is now accepted that the problem lies with the power cables and not with the graphics card itself. More specifically, it is the welding technique used that the experts question.

This is a case that has rocked the world of PC gaming for the last few days. Very happy to have received their brand new RTX 4090, some gamers quickly became disillusioned when they noticed that the graphics card heats up so much that it melts the cables connected to it. If the object is over 2000 €, the finding is not really well received by the community. As the controversy mounted, Nvidia quickly responded by announcing that it had launched an internal investigation into the affair.

But not only the manufacturer is looking for the cause of the problem. Several renowned figures in the field, such as GamerNexus and Igor’s Lab, are also involved in the effort and their discoveries could be crucial in solving the latter. It all starts with the first of them, which is good news all in all: The RTX 4090 is not a victim of a manufacturing defect. The problem is with the power cables.

More precisely, and as early reports suggested, it is the 16-pin adapter who is involved in the case. If it is not connected properly or if the cable is twisted too close to the connector, it will start to heat up due to poor management of the current sent to the graphics card, causing damage to the latter. However, not all 16-pin adapters are to blame.

Also read: He orders an RTX 4090 online, but discovers metal blocks in the box

GamerNexus actually discovered that. Thus, not all cables are housed in the same boat: some offer a voltage of 300V while others are limited to 150V. Suffice it to say that the difference is noticeable to say the least, but it’s not the strongest of them that’s the problem. On the contrary, because everything starts in reality bad soldering on the 150v wires.

300V cables, on the other hand, benefit from a very high quality weld with a much larger weld area than 150V cablesan individual solder for each of the wires they compose, with a much smaller total surface area. This soldering technique in particular can lead to damage when twisting the cable in the PC housing. Conversely, 300V cables withstand any kind of pressure much better. 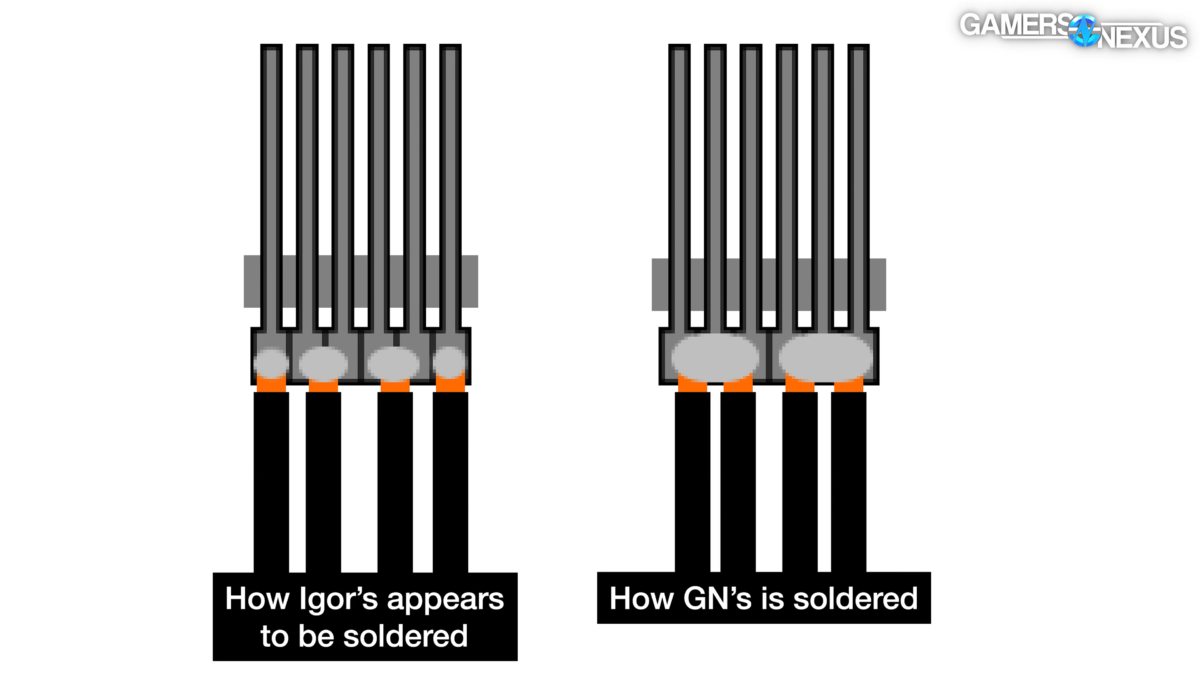 Does that mean there are good and bad adapters for your RTX 4090? Yes and no. Choose, It’s obviously better to go for 300V cables which will be more resistant to torsion. But the practice is a bit more complex than the theory, since you can’t decide between the two when buying. For its part, Nvidia has not yet explained the presence of these lower quality 150V cables.

Therefore, should it turn out that you are getting an RTX 4090 with a 16-pin 150V adapter, we strongly advise you to pay attention Do not bend the plug. You can also request a replacement from the seller. Good news, however, they seem to have less of a presence in the market, namely 7% according to GamerNexus. We are currently counting twenty testimonials from players who have fallen victim to the overheating issue.